The alternative meat industry is starting to gain some serious traction with the unlikely help of COVID19. Cattle farming for the meat industry is a water intensive process. It takes roughly 1,700 gallons (7,700 litres) of water to produce one pound of beef for the table. By contrast, a pound of soya beans has a water requirement of 280 gallons. It’s worth pointing out however that much of the water requirement for beef is made up from natural rainfall so the figures are not as shocking as they may first appear. Nonetheless, it could reasonably be argued that it’s more efficient to produce soya as a source of protein for human consumption than beef.

The world’s population continues to grow with estimates indicating that global population will increase to 9.7 billion people by 2050 (up from 7.7 billion today).

With this increase in population comes a trend of increasing urbanisation and wealth. The United Nations estimates that, coupled with the increase in total population, the percentage of people living in urban settings will increase from 55% today to 68% by 2050). 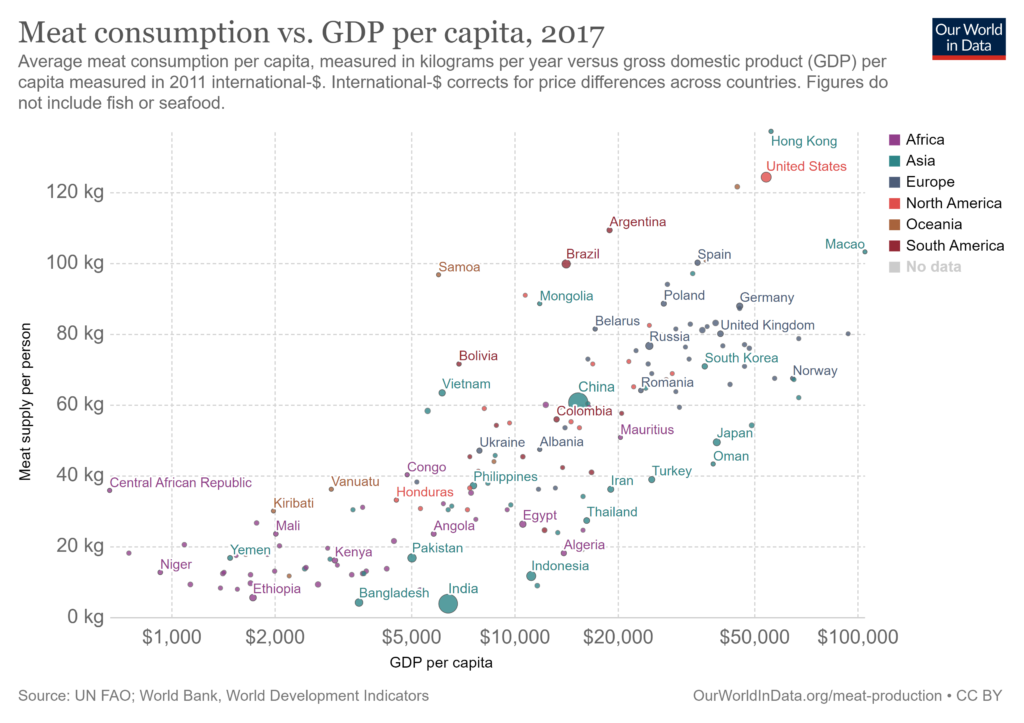 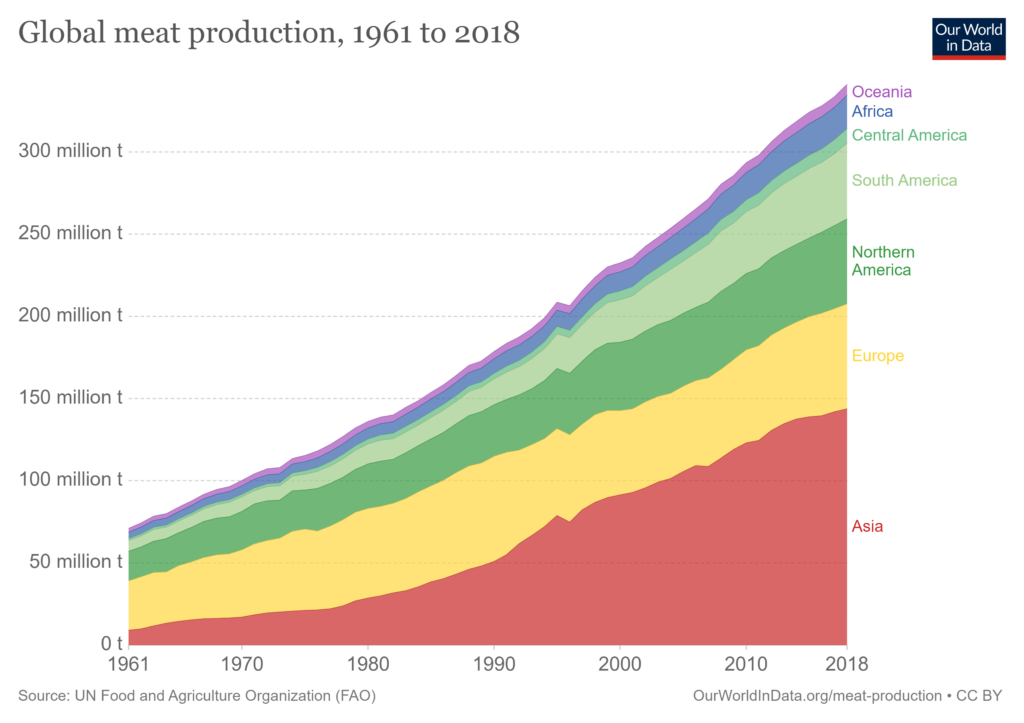 To meet this increasing demand, global meat production has been steadily increasing since the early 1960’s.

The image on the left illustrates this phenomenon.

Obviously this is not something that can continue indefinitely.

Much work has been going on in the Agtech sector as they look for ways to improve farming methods, increase yields and reduce negative environmental impacts. One such area is the production and development of plant based meat products

The 2020 COVID19 pandemic has also accelerated the take up of plant based meat products. In the 9 weeks to May 2nd 2020, sales of plant based meat products increased by 264% according to research by Bloomberg. This coincided with the shuttering of several meat processing plants in the United States (where Cargill, JBS, Tyson Foods and National Beef control over 66% of the total market).

Innovation is occurring across the alternative meat industry with companies such as Memphis Meat, Mosameat and New Age Meats all exploring ways of culturing meat in a lab. Think of it like growing a burger or a sausage.

Elsewhere in the alternative meats universe, companies such as Calysta are using technology to produce alternative protein based animal feeds. In Calysta’s case, they are using fermentation technology with methane (natural gas) as a feedstock to produce their FeedKind® product. Crunchbase reports that Calysta has raised a total of $129m to date from groups such as Cargill, BP Ventures (the VC arm of the oil major) and Temasek (Singapore’s sovereign wealth fund).

In Japan, there are a couple of companies taking a more DIY approach to meat cultivation. Integriculture (who recently raised $10.2m in a funding round) have partnered with Shojinmeat project to provide Japanese highschool students with microwave size heated boxes where they can grow meat at home. You can read more about that initiative in this article from QZ.

Israeli company, Hargol Foodtech (who recently raised $3m) is producing a line of grasshopper derived protein powders. Whilst that might not be everyone’s idea of a tasty protein shake, they are not alone with US companies All Things Bugs and Bittyfoods both exploring insect based food products.

One thing seems certain, with the amount of money and interest in the sector, the alternative meat / protein industry looks set to grow.

Stellium Services is a UK based specialist corporate development and Investor relations consulting business working with growth companies. For more information about out services and how we can help your business please review the information on our website or contact us at [email protected].

This website uses cookies to improve your experience while you navigate through the website. Out of these, the cookies that are categorized as necessary are stored on your browser as they are essential for the working of basic functionalities of the website. We also use third-party cookies that help us analyze and understand how you use this website. These cookies will be stored in your browser only with your consent. You also have the option to opt-out of these cookies. But opting out of some of these cookies may affect your browsing experience.
Necessary Always Enabled
Necessary cookies are absolutely essential for the website to function properly. These cookies ensure basic functionalities and security features of the website, anonymously.
Functional
Functional cookies help to perform certain functionalities like sharing the content of the website on social media platforms, collect feedbacks, and other third-party features.
Performance
Performance cookies are used to understand and analyze the key performance indexes of the website which helps in delivering a better user experience for the visitors.
Analytics
Analytical cookies are used to understand how visitors interact with the website. These cookies help provide information on metrics the number of visitors, bounce rate, traffic source, etc.
Advertisement
Advertisement cookies are used to provide visitors with relevant ads and marketing campaigns. These cookies track visitors across websites and collect information to provide customized ads.
Others
Other uncategorized cookies are those that are being analyzed and have not been classified into a category as yet.
SAVE & ACCEPT
Scroll to Top